Despite being empowered to curb high profits at international schools in Thailand, the regulatory body admits to relying on ”market mechanisms” instead.

The liberalization of regulation of international schools in Thailand over the last 15 years has seen net profit margins soar at some schools.

An investigation published in May 2021 by TIS Monitor showed the average profit margin as a percentage of revenue for international schools in greater Bangkok hovered around 7 percent for 2019, and 12 percent for 2018. At some schools, profit margins reach 20 to 30 percent, and in a few extreme cases, profits for some years have reached almost 50 percent.

At some of these very profitable schools, fees keep rising.

As TIS Monitor has previously reported, several sections of the 2007 Private School Act, reigning in on profits and dividends at international schools and giving OPEC, the regulatory body overseeing international schools, some power over setting fees, were quietly removed in the updated and currently used Act of 2011.

One crucial section remains intact. Section 33 of the Private School Act of 2011 stipulates that if the fees of a school are ”in a manner of seeking exorbitant profits” – meaning unreasonably high profits – OPEC has the power to order the reduction of the fees.

Given that some international schools in Thailand have profit levels that any sober analysis would conclude are enormous, a question arises: when does profit reach the level of being ”exorbitant”?

OPEC won’t intervene over profits
TIS Monitor met with Mr. Narongsak Boonyamalik, Specialist in Educational Standard Promotion, and Ms. Nittaya Pudthaisong, Educator at Senior Professional Level at OPEC, for an hour-long interview at OPEC’s headquarters located at the Ministry of Education (MoE) in the Dusit district of Bangkok.

It turns out that OPEC doesn’t use Section 33 and won’t intervene, whatever the profits are, at least as long as no one complains!

”If there are no complaints, we will let the schools operate according to the market mechanisms as we think that the schools are offering services parents have agreed on,” says Mr. Narongsak.

He also says OPEC has never used its power according to Section 33.

It should be mentioned that OPEC has at least once used another section, Section 34, for similar reasons. It empowers OPEC to order schools to reduce fees if they create an ”excess burden on the people”.

This occurred during the height of the COVID-19 pandemic. Despite repeated campus closures, some international schools attempted to raise their fees. This was heavily rebuked by the MoE who ordered them to backtrack. It was widely reported in local media, including TIS Monitor.

OPEC unaware of profits
According to the two OPEC officials, international schools in Thailand are not required to submit yearly financial data. Only if OPEC asks should it be handed over.

As TIS Monitor understands, OPEC, by its own admission, does not actively track profit levels in the industry whose profits they are set to regulate – at least when they become ”exorbitant”.

”Simply speaking, on this issue, we hardly intervene. People who would normally look into this issue would be those who check on the tax,” says Mr. Narongsak, adding that private schools are normally categorized as educational institutions and, as such, exempted from paying tax.

One crucial piece of information international schools do have to submit to OPEC is changes in the tuition fee structure.

What schools can charge for is regulated in Section 32 of the Private School Act. It is vaguely written, only saying that fees should take into consideration ”education management expenses, remuneration for teachers,” and ”… other expenses including the cost of business expansion and returns”.

Ms. Nittaya says there is no approval process involved from OPEC’s side regarding changes in the tuition fee structure or the level of the fees. OPEC only verifies that schools do not charge for items other than those listed in Section 32 and that parents are not charged more than once for the same item. Additionally, changes in fees need approval from the school’s board.

”We don’t want to use the word ’approve’ but rather ’acknowledge’. Before we acknowledge a new tuition fee structure, we must see whether they are following Section 32 and whether the issue has been approved at the school board’s meeting,” she says.

Fee items can be unclear
TIS Monitor tracks the fees of around 150 international schools in Thailand. These schools offer at least six years of education above the kindergarten level, and the instruction medium is the English language.

TIS Monitor asks the OPEC officials how this can be allowed, in light of Section 32.

”OPEC officers have the authority to ask the schools to clarify the items, what they are, and how they are determined. The schools must be able to answer the questions,” Ms. Nittaya says and adds that the items must also be clearly mentioned in the school’s executive meeting minutes or reports.

As the interview proceeds, it returns to the issue of profit levels. As it is by now clear that there is no ceiling for how high profits can be despite Section 33, TIS Monitor wants to know why a school that is very profitable can still raise its fees.

As an example, TIS Monitor looks at SISB, a successful group of international schools in Thailand with three campuses in and around Bangkok and one in Chiang Mai.

SISB is also the only international school company listed on the Thai stock exchange, SET. As such, key financial data is presented on the SET’s website. 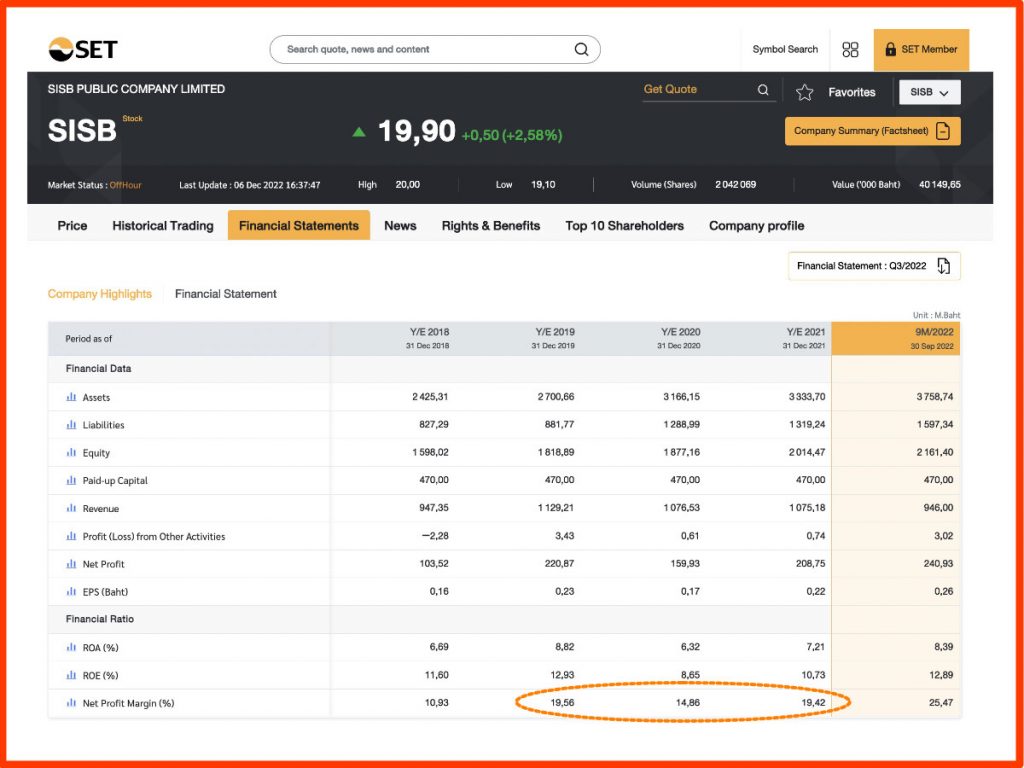 Here it is clear that the net profit margin for the year 2019 was 19,56 percent, and for 2021 was 19,42 percent. For 2020, when schools in Thailand saw many foreign families leave the country due to the pandemic, the profit margin was still a very healthy 14,86 percent.

Despite a very good profit margin, SISB has increased its fees. Fee data collected by TIS Monitor reveal that the fees for the SISB Pracha Uthit campus went up about 5 percent  from the school year 2021-22 to the year 2022-23.

Fees can rise – despite huge profits
When TIS Monitor asks how a school with such a healthy profit still can be allowed to raise fees given OPEC’s powers according to Section 33, it transpires that there is an informal threshold for profits that OPEC follows. This threshold is set at 20 percent.

Below this line, OPEC would never intervene. Above, it could intervene, but again, only if someone complains.

Obviously, SISB slides in at just below the 20 percent threshold.

”We would draw the limit at 20 percent, but we have never had a complaint,” says Mr. Narongsak.

However, Mr. Narongsak also admits that the 20 percent threshold is difficult to follow, as there are ways for school companies to hide profits or actively take action to lower them.

This view is echoed by the earlier investigation by TIS Monitor. It was clear that a significant number of international schools in Thailand present unrealistic financial data, with revenues not being in line with the number of students enrolled and the level of fees typically charged.

According to TIS Monitor’s researcher, it could be a sign of school companies having a highly complex corporate structure.

But even if the corporate structure is transparent, there are more hurdles for parents who are upset over ongoing fee hikes and want to know a school’s profit in order to file a complaint with OPEC.

Even though financial data from private companies are available on the website of the Ministry of Commerce, many schools are run by companies operating under a totally different name from the school, making them difficult to track down.

Even if the parent succeeds, it is TIS Monitor’s understanding that OPEC is likely to side with the school, as Mr. Narongsak reiterates during the interview:

”If it’s not against any policy or any law, we allow the schools to collect fees according to the market mechanism. We won’t intervene with the schools.”