International schools in Thailand may have much lower student-teacher ratios than public schools, but the ratio can still vary widely between schools.

Avoiding public schools with large classes, and instead enrolling children in schools where teachers have enough time to pay attention to the needs of every student is one of the major reasons for choosing an international school.
Despite this, picking an international school is far from a guarantee that your child will receive enough support from teachers. There is a great amount of variation in student-teacher ratios at international schools in Thailand. The top ranked school has less than two students per teacher, but some have more than five times that figure.
TIS Monitor has been given exclusive access to data from the Ministry of Education on teacher and student numbers, as reported by the schools. Drawing from these official statistics, TIS Monitor is now able to present the first school-by-school analysis of student-teacher ratios.
In this first of a series of publications we look at the schools with the most favourable student-teacher ratios of all of Thailand’s international schools.

More teachers equals more attention per student
The importance of this ratio in estimating educational quality has long been debated.
“Numerous observers argue that schools with lower student–teacher ratios are better at teaching students complex subjects such as, languages, mathematics, and science, than those with a higher ratio of students to teachers. Pupils in large classes can drift off task as teachers have to direct most instructions to the whole class, instead of giving individual attention to each student,” Dr Anders Engvall, head of research at TIS Monitor tells us.
According to official statistics, Prem Tinsulanonda School in Chiang Mai has a very favourable ratio, but all of the schools ranked in the top ten, according to this metric, have less than five students per teacher. This is a fraction of the Thai national average of more than 16 students per teacher.
“There is actually only a single international school that has a teacher-student ratio higher than the national average across all types of schools in Thailand, and that is Ramkhamhaeng Advent International School in Bangkok,” Dr Anders Engvall informs us. 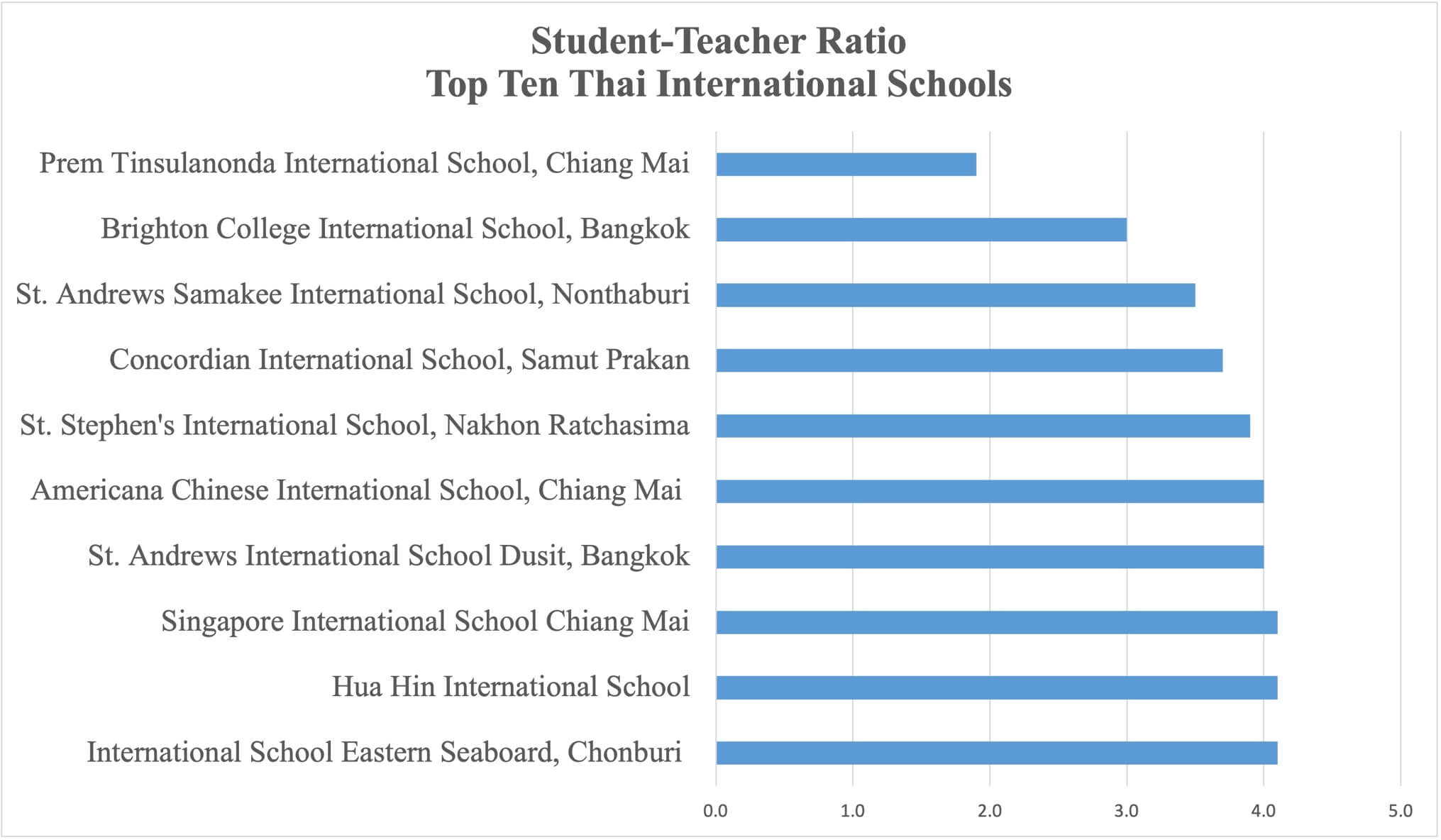 Q: Should we be cautious with these numbers?
“Well, lower student-teacher ratios often have to be weighed against other measures, such as higher salaries for teachers, investing in teachers’ professional development, greater investment in teaching technology, or the more widespread use of teaching assistants, whose salaries are often considerably lower than those of teachers. Still, having more high-quality teachers at a school, rather than fewer teachers of the same capability should be better. With fewer students per teacher, students can receive more attention. At the same time teachers themselves have more manageable workloads, as they have fewer students to keep track of. This translates into teachers having more time to spend one-on-one with students,” says Dr Engvall.

Q: Was there anything that surprised you in your research?
“It is notable that none of the large, established, Bangkok-based schools with good name recognition are among the schools with the most teachers per student. The lower student-teacher ratios are generally found outside of Bangkok, sometimes at newer schools. However these schools may be in the process of expanding their student numbers, which could lead to changes in the ranking over the coming years,” Dr Engvall says.

In the coming weeks TIS Monitor will present a number of articles on the subject of teacher to student ratios at international schools.